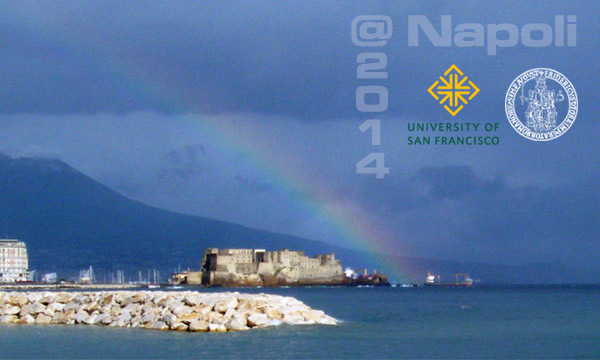 Campania Felix LLC, Mind the Bridge Foundation, Two Universities by the Bay, and Unite the Two Bays
cordially invite you to:

Please book now
The proceedings will be donated
to the two 2014/15 UTTB Science and Technology programs.
Event Registration

An evening of Music, Art, Theater and Cuisine

The proceedings will be donated
to the two 2014/15 UTTB Science and Technology programs.

The Piedigrotta- A Neapolitan Futurist Sound Poem The Piedigrotta (1913) is considered the pinnacle of Futurist sound poetry. The explosions of firecrackers, the cries of street vendors, the tenors battling at the annual song competition: By mimicking the explosions of mortars and shrapnel, and the complexly articulated noise of a wild street party, Francesco Cangiullo’s Piedigrotta truly succeeds in celebrating-and synthesizing-life. His epic poem about the yearly Neapolitan street party dedicated to the Madonna di Piedigrotta, brilliantly hijacking onomatopoeic techniques typically found in Futurist poetry recreates the sound of an entire city presented as a living organism.

Cuisine catered by Locanda Positano At the heart of Italian cooking is the ability to be spontaneous and flexible with the freshest ingredients available. Positano sources from local farmers to turn their bounty into delicious fare to share. Positano’s pastas, regional dishes, and signature pizza speak true Italian simplicity and love. (http://www.locanda-positano.com)